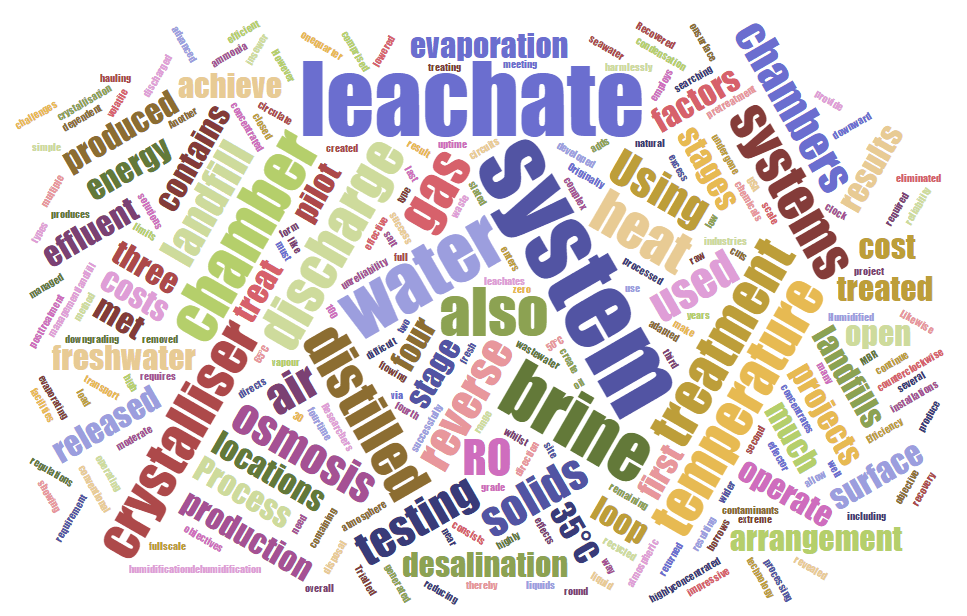 Researchers have been searching for an effective leachate treatment system for several years. Because leachate contains a wider range of contaminants than any other effluent type, the solutions that have been used to treat it have had to not only be complex, but also dependent on advanced technology. These two factors continue to make some leachate treatment systems very difficult to operate successfully.
Leachate slated for surface discharge can be treated using reverse osmosis or RO. However, this method will result in the production of RO brine, which must then be managed via the transport of the brine to a disposal site. This requirement adds to the operating costs of facilities. Likewise, evaporation systems have met their own challenges in the form of unreliability when concentrated leachates are processed.
The Crystalliser System
Originally developed for the treatment of wastewater from oil and gas industries, the crystalliser system was adapted for use in the treatment of leachate from landfills with much success. Not only can the system treat both raw leachate and the brine created by the reverse osmosis process, but it can also do so with no pre-treatment being required.
The Process
Using salt, the crystalliser system employs a humidification/dehumidification system in four stages. This both concentrates leachate to over 30% solids and produces freshwater.
The system is comprised of four chambers, three of which are closed air circuits. The first three chambers circulate the leachate in a counter-clockwise direction, whilst the fourth open loop chamber directs leachate downward. Humidified air in each chamber is removed, and used to create distilled water.
In the first chamber, water containing leachate enters the system where the temperature is 65°C before flowing into the second chamber. Here, the temperature is lowered to 50°C. The third chamber’s temperature is 35°C. In the last open air loop, the temperature is between atmospheric and 35°C. It’s at this stage where excess heat and the resulting solids or brine are released. Any remaining water vapour at this stage is harmlessly released into the atmosphere.
Energy Efficiency Using Desalination Arrangement
The crystalliser system borrows from the seawater desalination arrangement which consists of multiple effects or stages. Any moderate grade heat that the waste heat, natural or landfill gas is used in the leachate evaporation of each effector chamber in the system.
The four-time downgrading of the heat generated from condensation is also recycled into distilled water. This distilled water production cuts gas load to one-quarter of that of conventional leachate evaporating systems. Recovered distilled water which contains volatile chemicals like ammonia requires only simple post-treatment before being discharged. The highly-concentrated solids and brine produced by the system are returned to the landfill. All of these above factors are what allow the system to be highly energy and cost efficient.
Projects and Results
This system has undergone much testing in the USA. Trialled in both full scale and pilot project installations, the objectives of the projects were to provide a way to produce fresh water meeting US environmental regulations for surface discharge, while being low in cost and high in reliability. Another objective of testing was to achieve near zero liquid discharge and achieve extreme recovery.
The results were impressive, showing that the system could operate round the clock at 100% uptime on many types of leachate, including that from landfills, RO processing, gas well liquids and MBR effluent. The freshwater produced be the crystallisation system met environmental limits for both in-sewer and on-surface discharge.
The system testing in both pilot and full-scale locations also revealed that, for those locations treating leachate with reverse osmosis systems, the brine could also be treated so that hauling costs could be eliminated, thereby reducing the overall need for brine management.

Would you like to know more about Crystalliser Systems – The Leachate Treatment Alternative? Fill in your details below and let us know how we can help.